It’s hard to believe that the Animal Kingdom is 10 years old.  I was there for opening day and to say this park has grown in the past 10 years would be an understatement.  New rides, shows, attractions and restaurants have all been welcome improvements to a park that started out feeling less than complete when it first opened.  I feel honored to have been able to witness that growth and to be present at the 10th Anniversary Ceremonies.

It started out as a very early day, well for me anyway.  We arrived at the park at 8AM to find the folks from WDW Celebrations had an area set-up just to left in front of the turnstiles.  There they greeted everyone with a smile and gave out lanyards with ID tags, a small card with the days events on it and a very cool 10th Anniversary button.  I must say I am totally impressed with the way this has been handled and executed.  We did not sign up beforehand but we were still welcomed and given a sticker that indicated we had priority seating for one of the main events, a lecture given by Imagineer Joe Rohde.  Mr. Rohde is one of the driving forces behind Animal Kingdom – but more on him and his lecture later.

After getting our ‘credentials’ we went to get in line at the turnstiles.  The park was set to open at 8:45AM and the lines were already back to the ticketing booths.  As we made our way through the crowd I noticed a gentleman wearing a DIS Unplugged Podcast t-shirt.  I said ‘excuse me sir, do you listen to the DIS Unplugged’ he said ‘yes’ and I introduced myself and Kevin.  It was Tony, Anthony’s father.

If you listen to the Podcast you know that Kevin says ‘Hi’ to Anthony on every email show.  Anthony’s Mom emailed us a while back and said that the kids in Anthony’s class didn’t understand or appreciate his love of Disney – but Anthony was thrilled to find the Podcast and other ‘like minded’ people who loved Disney as much as he did – and some who even made a career out of it.  Anthony has come to symbolize for us that part in every Disney Fan that feels they need to explain their love of Disney, or who are made to feel a little ‘left of center’ when talking about the magical place they are passionate about.

After meeting Anthony’s Dad we met Anthony himself and I think Kevin was more star-struck to meet him than anyone else.  We met the rest of the family, gave them some DIS Unplugged pins, posed for pictures (yes, there is a new picture of me out there somewhere) and Kevin even signed Anthony’s shirt (talk about uncomfortable moments).  After socializing for a few minutes we took our spot in the back of the line and waited for the park to open.  A few minutes later we were met by Bob and some other folks.

Upon entering the park we headed to the Tree of Life where the crowd had stopped.  Our timing was perfect because as soon as we got situated the music started and performers from the Festival of the Lion King Show appeared.  They danced and marched in front of us.  Next came a ‘float’ of sorts carrying Erin Wallace, senior vice president of operations for the Walt Disney World Resort, Jane Goodall, world-renowned primatologist and Joe Rohde, senior vice president of Walt Disney Imagineering and executive designer of the Animal Kingdom Theme Park. 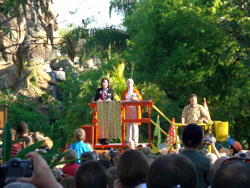 Each gave a short speech about the Animal Kingdom, the newly renamed Disney Worldwide Conservation Fund and how proud they all were to be a part of The 10th Anniversary Celebration and rededication ceremony.  The highlight was when Jane Goodall gave Disney a chimpanzee ‘thank you’ for all they do to help wildlife around the globe.  It’s certainly nothing I can describe here except to say it reminded me of a specific scene from the movie When Harry Met Sally.

After the rededication ceremony we worked our way back to the Theater in The Wild to hear Joe Rohde.  I was surprised to see the theater was only about half full given the speaker and subject matter.  I think Disney should have had signs out letting people know what was going on.  Many folks walked by us in line and were wondering what was going on.

Mr. Rohde was introduced by Valerie Bunting, VP of Disney’s Animal Kingdom Park, and he was met by thunderous applause. 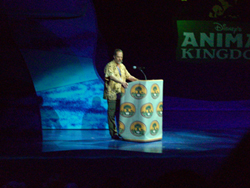 Mr. Rohde spoke for about 45 minutes and covered many topics including; early concepts for the Animal Kingdom Park, what the land was like prior to development, what it’s like to try to bring a concept this big to reality and what it’s like to be a Disney Imagineer.  It seemed as if he thought he was only speaking to Disney Cast Members instead of ‘guests’ as he went into great detail to explain that the Animal Kingdom is a ‘story’ rather than a destination and that it is important for Cast Members to help guests realize the magic of watching that story rather than racing from one ride or show to another.

He used slides to show the progress of the park as well as where many of the conceptual ideas came from.  One thing that fascinated me the most about his presentation was that he had photos of actual notes and story boards they saved from early brainstorming sessions about the park.  It was enthralling to hear how the Imagineers came up with concepts and overcame problems to make an entire Theme Park come to life, especially one that involves some unpredictable elements – like live animals.

All-in-all he gave a compelling presentation that any true Disney die-hard fan would love and I am happy I got up early to experience it.