Saturday in the Park with Scar – Part 1 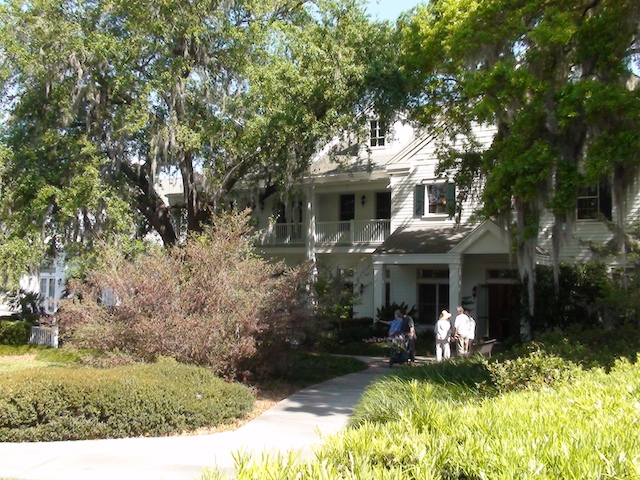 Oh, what a day I had yesterday.

Let me begin my long journey into madness – and let me tell you how I managed to meet a listener who drove 15 hours from Ohio to Orlando in hopes that he might win a cruise. But before we get to that – my day started innocently enough agreeing to go with Walter (a.k.a. Scar) to the Central Florida Plant Show – an annual event that takes place at the stunning Harry P. Leu Gardens just outside of Downtown Orlando. When I say stunning – if you’re a plant & flower person – there are few places more beautiful than Leu Gardens. I however – am not a plant & flower person – I’m a plant & flower KILLER. A plant in my possession, or even within my immediate sphere of influence is fated a miserable death sentence. The heartiest, strongest of plants have been vaporized by my seemingly freakish ability kill anything green. It’s not that I don’t love to look at plants and flowers – I just kill them.

Now Walter IS a plant person. I call him “Nature Boy”. He has an AMAZING collection of orchids, some of which he has been raising since he was in 8th grade. Orchids are not for the faint of heart – they take a lot of work, and his collection of nearly 100 Orchids is a testament to his ‘plant-ness’. So, when Walter asked if we could go to the plant show, I figured – what the heck – he puts up with a lot of crap having to deal with my Disney obsession, so a leisurely stroll thru Leu Gardens on a Saturday morning to buy plants isn’t too much to ask. What I failed to realize is that people who are into plants make people who are into Disney look self actualized. I thought we had weird rituals – but this was something all together different.

My first indication that I was on a descent into the Twilight Zone came when we realized the parking lot for Leu Gardens was full and that we had to find alternate parking – which, I should tell you, was non-existent. People were parking on the street, on the grass, in other people’s gardens. Range Rovers, Hummers, Expeditions abound – people brought their dogs, their kids, their mothers – and apparently, their big floppy garden hats. Yes, there were lots of big floppy garden hats – but I’m getting ahead of myself. We were looking for alternate parking …

Well, Scars idea of alternate parking was a half mile away from the entrance to Leu Gardens. I’m not exaggerating – we had to walk a HALF A FREAKIN MILE to go walk around and buy plants. Keep in mind that I was working off about 4 hours of sleep, and my back has been hurting pretty bad lately – but he was undeterred – we were going to this plant show if it was the last thing we ever did. Of course as we’re getting to the entrance, Walter announces “that was a long walk – I don’t know if it’s worth all that” – to which I replied “You couldn’t have decided that back at the car???” – Fine – we’re here, let’s just walk around and try and make the best of it. That’s when I first saw the hat people….. 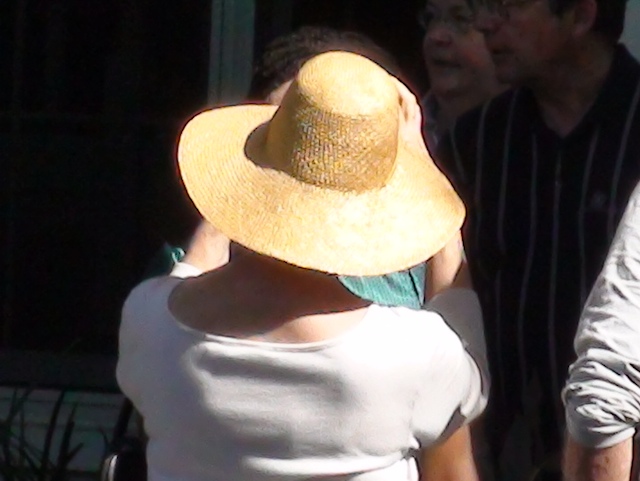 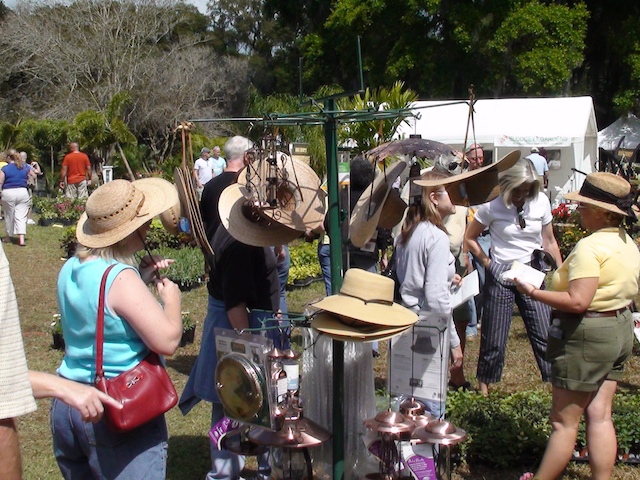 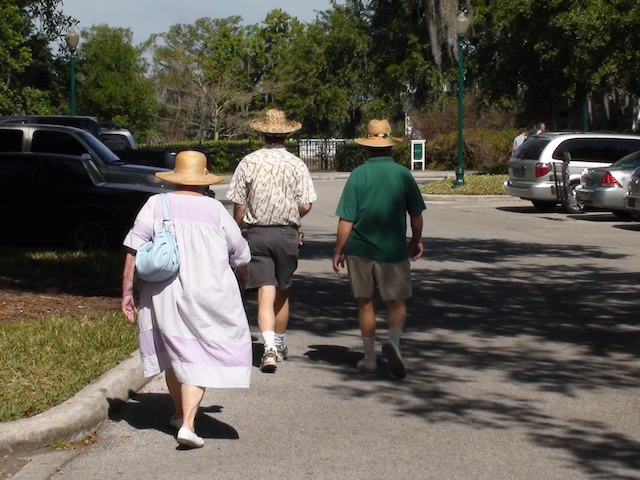 They were everywhere – like swarms of locusts – men and women alike wearing big floppy gardening hats, and carrying wagons. Wagons were also a big part of this outing. Everyone (except us) had wagons – wagons of all kinds. 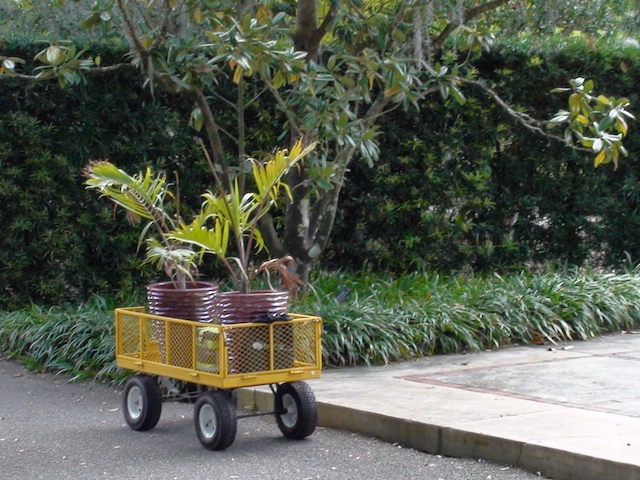 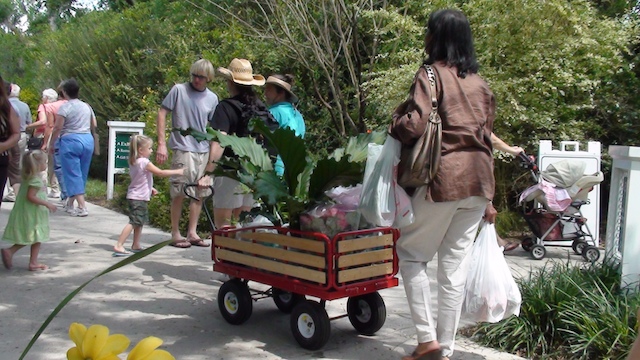 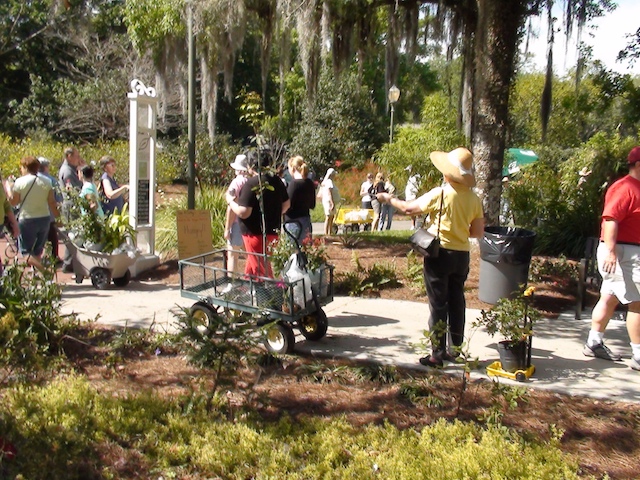 We even spotted the queen of the hat people, although it’s entirely possible she was getting ready for a drag show. 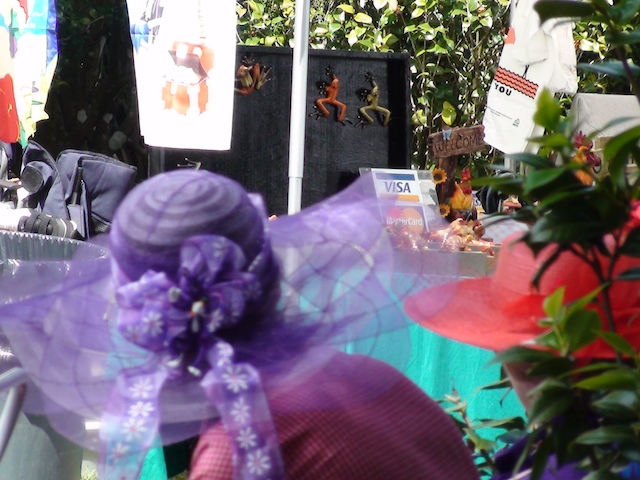 Now, if the whole wagons and hat thing wasn’t bizarre enough, there were the bizarre conversations you couldn’t help overhearing. Did you know that “this tree is deciduous, you don’t find many deciduous trees in Florida” and “isn’t this the most interesting elephant ear you’ve ever seen” and “some cymbidiums need cold in order to bloom” and “were those day-lilies forced?” And then complete the picture- I’m not kidding – a guy walks past me, tips his hat, smiles and says “how dee doo”. HOW DEE DOO???? Who talks like that??? I’m tired, I’m cranky and now I’ve got guys with big floppy garden hats saying “how dee doo”….no, this was not okay on any level. But, like I said – Walter puts up with A LOT worse being with me, so I kept my comments to msyelf, knowing full well I was going to put this all in the blog. And before you accuse me of exaggerating the weirdness factor of this event, behold….. 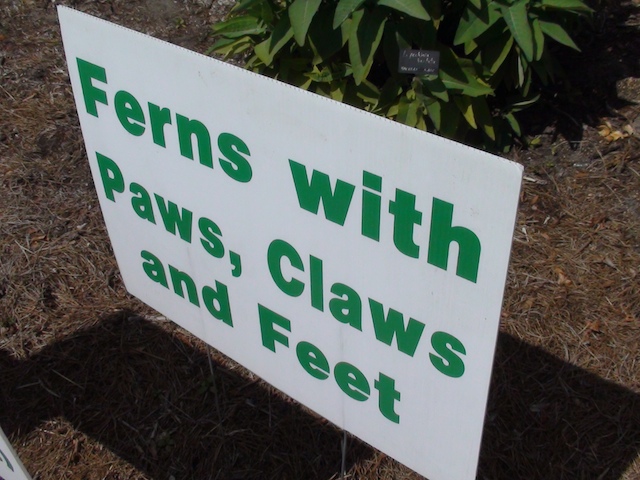 I overheard a woman say “Mom, look – ferns with feet” as though she had just discovered Atlantis. Ferns with feet?? As John would say – so many jokes, so little time.

There were also lots of societies in attendance. The Central Florida Historical Rose Society is just the kind of place I would imagine women with floppy garden hats and wagons would hang out. I wasn’t going to ask the obvious question “what’s a historical rose”, for fear I’d be exposed as the Anti-Plant and beaten about the head and neck with historical rose bushes. Of course, no plant show is complete without the Flowering Tree Society – I wasn’t aware that tree enthusiasts were so pervasive that they had split off into sub-groups like flowering and non-flowering. 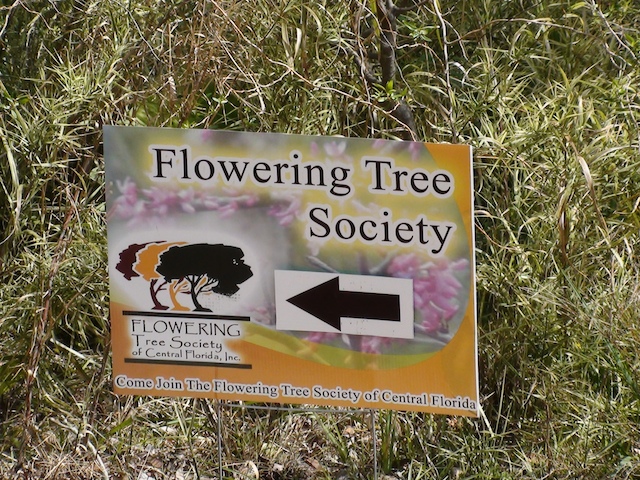 Eventually, Walter had scoured each vendor for plants and it was time to begin the epic journey back to the car. I was even less amused about the walk back to the car after dragging myself thru plant world, but I kept a brave face as not to rain on Walter’s parade. Little did I know that I’d be dragging him into hell later that night at Universal on what had to be the busiests night I’ve ever seen at that park…more about that in Part II.

Velvet Sessions
Are You a Rising Star?